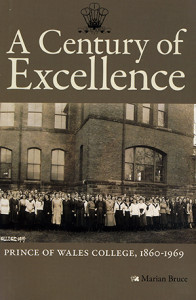 L. M. Montgomery described her time at Charlottetown’s Prince of Wales College as “the happiest year of my life.”

As Prince Edward Island’s only provincial non-sectarian college, which educated thousands of Islanders in the century spanning 1860 to 1969, Prince of Wales College engendered passion in its students. Even today, a half-century after its abolition, alumni recall the College with fierce loyalty and devotion that comes from a deep sense of community and strong familial ties.

With exceedingly high standards, it was not easy to get in. Despite the dismal state of education in the public schools at that time, Prince of Wales maintained high academic standards from the beginning, thanks largely to a succession of gifted, eminently qualified principals. Indeed, the schools entrance exams struck fear into the hearts of many prospective students, with good reason: the exam failure rate was often 30 to 40 per cent. It is no wonder, then, that PWC alumni went on to become award-winning graduate students and teachers, writers and doctors and scientists, lawyers and judges, and university professors, deans, and presidents.

With her natural gift for telling a good story, author Marian Bruce demonstrates how religion, politics, and blood ties all played a large role in the birth, life, and death of Prince of Wales College, from its beginning as the Central Academy to its conclusion with the formation of the University of Prince Edward Island. The book showcases many of the fascinating professors who taught at PWC, and the experiences of many of its alumni. Incorporating interviews of alumni, faculty, and staff, as well as drawing upon extensive archival material, Bruce has captured educational history that spans generations.

“A Century of Excellence should be read by anyone with an interest in Prince Edward Island higher education . . . it sets a new standard.”
Dr. Ian Robertson, Professor of History, University of Toronto