An Introduction to the coming of Syrian / Lebanese Emigrants to Prince Edward Island
by David Weale, with illustrations by John Burden
Non-Fiction, 68 Pages with b/w photos, soft cover 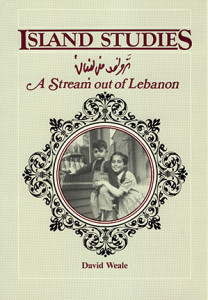 The Lebanese in Prince Edward Island make up less than one percent of the Island’s population. But a group is not interesting or significant simply because of its numbers. It is the texture and genius of individuals which is the real touchstone of human history, and the study of a few people can sometimes shed more light than the study of many. Such is the case of David Weale’s book on the Lebanese, who first began coming to PEI in 1888 and who continue to find a new home there. We not only learn important things about them, we also learn about the human spirit amidst the universal themes of emigration and acculturation.
Like the many emigrants who preceded them to Prince Edward Island, the Lebanese arrived in this postage-stamp of a province with little in their hands. But in their minds and hearts and on their tongues they carried an entire ancient culture. Every attitude, every habit, every value, every custom, every nuance of feeling came with them like buttons on a coat.
Author David Weale views emigrants as cultural arrows. They lodge in a new place but continue to embody their own society. Everything they do, see and feel must be filtered through their past experiences.