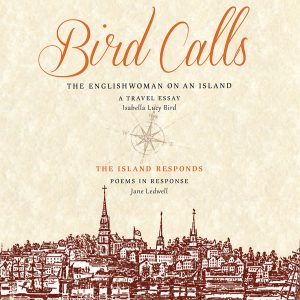 British travel writer Isabella Lucy Bird visited Prince Edward Island for six weeks and published an account of her stay here that was both scathing and charming. Paris may be the gayest city in the world, she wrote, and London the richest, but Charlottetown was “the most gossiping.”
“I never saw a community,” she continued,” in which people appear to hate each other so cordially.”
Contemporary Island poet Jane Ledwell was both fascinated and exasperated by Bird’s haughty, privileged judgement and decided to “write back” – 160 years later. The result is Bird Calls, the latest title published by Island Studies Press at UPEI.
Bird Calls weaves the travel prose of Isabella Lucy Bird with Ledwell’s poems written in response, and delivers an intriguing conversation for the reader which contrasts PEI then and now, and showcases the talents of two accomplished writers, from very different generations.

The printed book is available at the Bookmark in Charlottetown, and at the UPEI bookstore.It is also available as a digital file.
To purchase either. CLICK HERE.