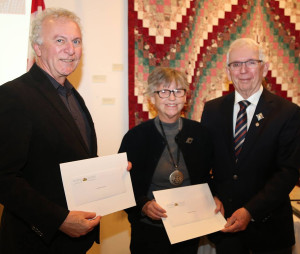 Samuel Holland: His Work and Legacy on Prince Edward Island, was chosen Publication of the Year for 2015 at the PEI Museum’s Heritage Awards held recently in Summerside. Written by Earle Lockerby and Doug Sobey, the book was co-published by Island Studies Press at UPEI, and Holland College, to mark the 250th anniversary of Samuel Holland’s mapping of Prince Edward Island. The book is available in softcover at Island bookstores, plus here at this link:
http://upei.bookware3000.ca/Catalogue/local-books

A total of 17 heritage awards were presented by the PEI Museum and Heritage Foundation, plus five new Island sites received historical designation. More details on these awards are available at:
http://www.gov.pe.ca/newsroom/index.php3?number=news&newsnumber=10630&dept=&lang=E#pk_campaign=HomeP

In photo above: Accepting the Publication of the Year award from Lt. Gov. Frank Lewis, right, are Georges Arsenault, and Katherine Dewar, friends of the book’s authors, Earle Lockerby and Doug Sobey.