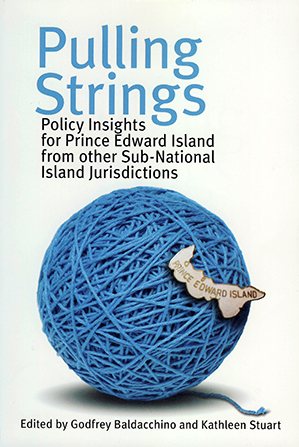 People fall into the trap of always looking at PEI as Canada’s smallest province. But size doesn’t matter – it’s a province, with all the rights and the potential that goes with it. This book represents a major research project developed at the University of Prince Edward Island where contributors looked at what lessons Prince Edward Island could learn from a global review of over 100 islands that enjoy similar political autonom: from Bermuda to Tasmania, from the Cook Islands to the Faroes. This book collates policy papers that emerge as particularly salient in the development strategies of most sub-national (or non-sovereign) island jurisdictions today, and locates them within Prince Edward Island’s own context. The outcome is this handy manual for reflection for all those engaged in the governance of islands.

“The focus on sub-national island jurisdictions allows us to re-imagine island communities and to re-invent spatial configurations by bringing these territories together in ways that compare and contrast the difference and similarities amongst them . . . with this repositioning of islands, their potential is amplified and their dependency displaced.”
Jean Mitchell, Anthropology professor, University of Prince Edward Island

“In recognizing Prince Edward Island as a jurisdiction in this very active and strategic sense, the emphasis is not on being a small province, but on being a Province.”
Godfrey Baldacchino