An Environmental Fable
by Alan MacEachern
Non-Fiction, 144 Pages with b/w photos, soft cover
“ . . . a fable about our Western commitment to environmentalism . . .” 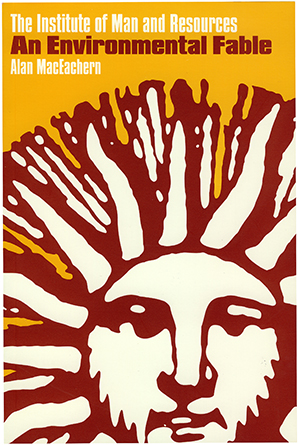 In 1975, in the midst of a worldwide oil crisis, Prince Edward Island was facing the highest energy prices in Canada. But Canada’s smallest province became the talk of the nation when the government of Alex Campbell took a bold step: it proposed to make the Island a veritable laboratory for renewable energy. Thus was born the Institute of Man and Resources (IMR), whose mandate was to research, develop, and demonstrate systems for alternative energy and resource self-sufficiency.

The IMR attracted a mix of back-to-the-landers, committed young engineers, scientists, and ordinary citizens interested in moving the world beyond oil. The IMR also attracted considerable attention in environmental circles, nationally and even internationally.

However, within a decade it was all over, and the Institute of Man and Resources was dead. Why did the collapse occur? How had the Institute made such a name for itself in the first place? And what is its legacy?

This book chronicles the rise and fall of the Institute of Man and Resources, an important Canadian environmental group of the 1970s, and contributes to the broader literature on the history of environmentalism. Indeed, as the debate over global warming sharpens public awareness once more about the repercussions of fossil fuel use, this balanced and nuanced history seems more timely and relevant than ever.

“. . . A first-rate history, which chronicles an important conservation/environmental institution. . . . Very little has been written about the institutional dynamics of the environmental movement in the 1970s, which makes this work ground-breaking and significant.”
Bill Parenteau, Professor of History, University of New Brunswick