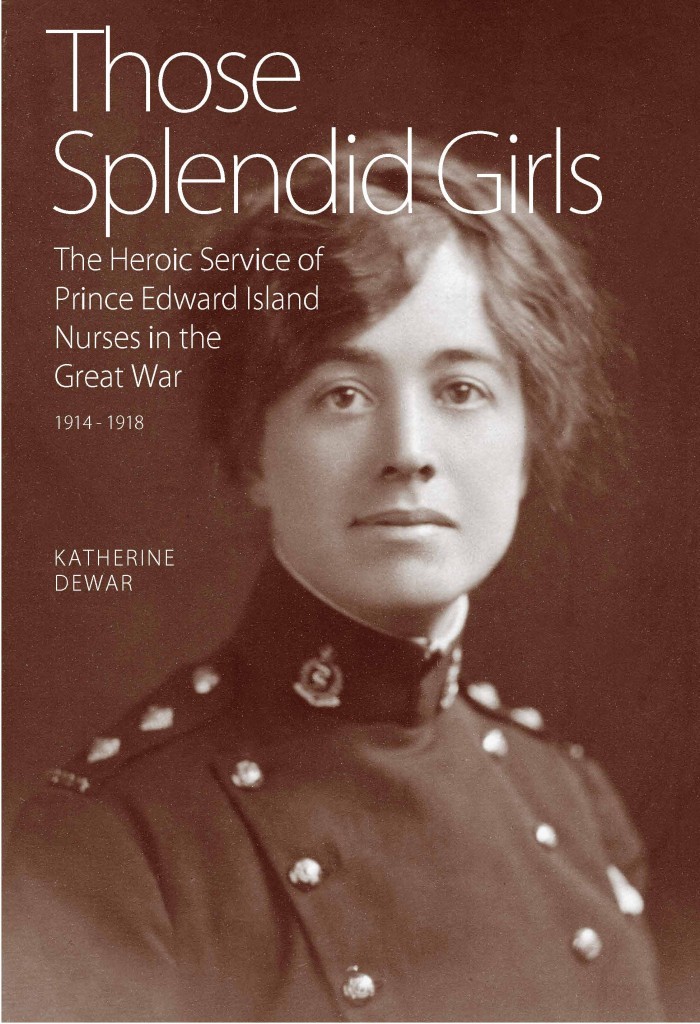 In their day, the many Island women who served as nurses in WWI didn’t see themselves as heroic. But 100 years later, and knowing better the hardships they endured in that war, this book salutes the courage of all Canadian nurses who served and redresses a century-old wrong: the absence in the historical narratives of Prince Edward Island — and of Canada — of the contribution of nurses to the First World War.
Over 115 women from Prince Edward Island answered the call to war, and many of their names were unknown until now. Granted rare access to private diaries, letters home, and fragile photo albums tucked away in dusty attics, author Katherine Dewar has pieced together their stories of hospitals, bombings, fear and friendships to provide this powerful new account of the war.

At war’s end, many Island nurses were unwilling to swap their wartime autonomy and authority for housework or poorly paid nursing positions on P.E.I.; instead they took up senior positions in nursing schools and in hospital administration, most often in the “Boston States” and in California, and through these, they achieved lasting contributions to the profession of nursing in North America in the 20th century.

Those Splendid Girls features a 35-page biography section detailing each nurse’s family, education, military service and life after the war. It is a valuable resource for genealogists.

“With a nurse’s sensitivity and determination, Katherine Dewar has skilfully combined unknown and unused Island sources with military records and a wide array of secondary sources to break the ‘great silence’ surrounding the military nurses of PEI during the First World War. We need a Katherine Dewar for every province.”
Susan Mann, president emeritus of York University, member of Order of Canada, and author of Margaret Macdonald: Imperial Daughter.

“Katherine Dewar has deftly excavated the largely forgotten history of PEI’s Great War nursing sisters. The result does more than restore a measure of gender balance to our understanding of that shattering conflict; it tells a ripping good yarn about women at war.”
Edward MacDonald, History professor, UPEI and author of If You’re Stronghearted: Prince Edward Island in the Twentieth Century